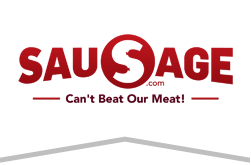 A sausage is a food usually made from ground meat with a skin around it. Typically, a sausage is formed in a casing traditionally made from intestine, but sometimes synthetic. Some sausages are cooked during processing and the casing may be removed after.

Sausage making is a traditional food preservation technique. Sausages may be preserved by curing, drying, or smoking. Sausage making is a logical outcome of efficient butchery. Traditionally, sausage makers would salt various tissues and organs such as scraps, organ meats, blood, and fat to help preserve them. They would then stuff them into tubular casings made from the cleaned intestines of the animal, producing the characteristic cylindrical shape. Hence, sausages, puddings, and salami are among the oldest of prepared foods, whether cooked and eaten immediately or dried to varying degrees.

Sausage.com has been offering quality sausage products for years. Our vendors are the top in the industry and provide the best products available.